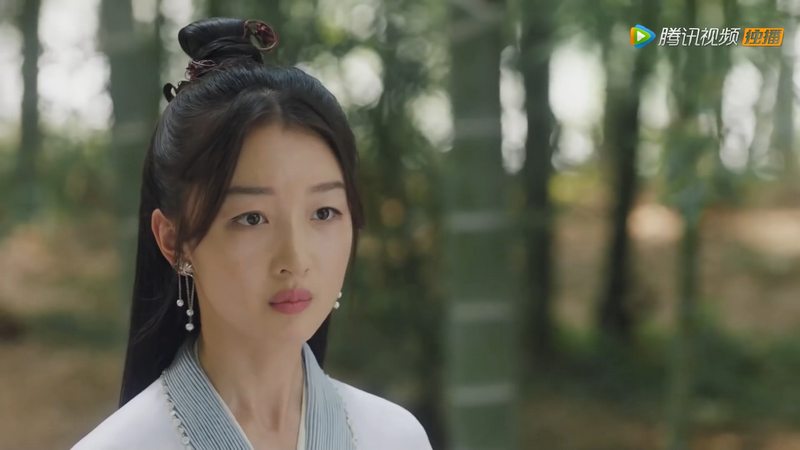 Shanggu brags about her progress to Baijue.

Hongri tells Shanggu to take a break, but Shanggu wants to keep training.

Baijue can get three items from Zhiyang, but he has to go to the Heavenly Realm to find the Xuanjin Iron. Tianqi, sensing a potential rival, warns Baijue not to fall in love with Shanggu. Zhiyang cautions Baijue to stay alert for Shanggu’s upcoming trial, which she must pass to become a god.

Seeing devils at Mount Lookout, Hongri wants to avoid them. Shanggu, on the other hand, is eager to practice her skills.

Hongri reports what Shanggu is doing to Baijue.

A thunderstorm appears, signaling the start of Shanggu’s trial.

Shanggu brags to Baijue about defeating devils and passing her trial. After giving the Ancestral Sword to Shanggu, Baijue faints.

Taking thunder strikes and creating a sword damage Baijue’s spirit and shorten his lifespan. Knowing this, Shanggu needs Hongri to strengthen the barrier while she tries to save Baijue.

There are burn marks on Baijue’s chest. Shanggu doesn’t know how to transfer her power to Baijue, so she uses another option, putting her lips on his lips to force her Original Being into his body.

Shanggu acknowledges Baijue as her teacher, promising to obey him and cultivate from now on. Hongri says the barrier is collapsing.

Shanggu uses the Ancestral Sword to protect herself until Baijue comes to her rescue. Except being sealed, the Nether World is beautiful like the three realms, with toxic Deicide Flowers. Baijue warns Shanggu not to look into Xuanyi’s eyes. Xuanyi takes Shanggu somewhere else.

Xuanyi says Baijue is cold to everyone, especially females, but Shanggu appears to be the exception. Shanggu disagrees and looks into Xuanyi’s eyes, allowing him to read her mind.

Sending Shanggu out of the Nether World, Baijue tells her to find Zhiyang. Xuanyi remembers when he was Chief God, Baijue was one of his subordinates.

Running into Zhiyang and Tianqi while they are rushing to the Nether World, Shanggu realizes that Baijue used her to trap Xuanyi. Tianqi doesn’t want her to be mad at him, so he says Zhiyang forced him to participate in Baijue’s plan.

Shanggu is upset, wishing Baijue had explained his plan so she could help him. Baijue couldn’t take that risk because Xuanyi can read minds. Zhiyang and Tianqi want to celebrate, making Shanggu more upset.

Hongri tells Baijue what Shanggu did, giving her Original Being to Baijue to save him. If Baijue had known, he wouldn’t let Shanggu risk her life in the Nether World.

Yuemi reminds Shanggu not to be confrontational when they ask Baijue to return Shanggu’s Original Being.