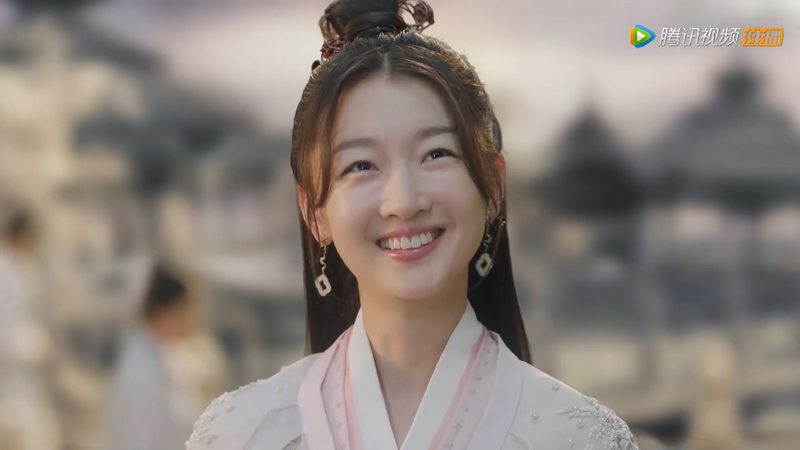 Baijue sees goddesses everywhere, including Xueying trying to dance her way into his heart.

The goddesses are grateful to Shanggu for helping them get into Changyuan Hall, not knowing that Baijue is listening to their conversation.

Baijue forbids Shanggu from entering Changyuan Hall and never wants to see her again after she betrayed him.

Tianqi tells Baijue that Shanggu didn’t do it for gifts but to make Tiger Demons laugh.

[Flashback: Shanggu collects the happiness of goddesses when they see Baijue. Then she sends their happiness to Tiger Demons, making them laugh.]

Tianqi urges Baijue to apologize to Shanggu, and he says he ate the peach. For Shanggu’s birthday gift, maybe Baijue can carve a bracelet for her.

Shanggu made Tiger Demons laugh for a while, but her duty as Chief God is to keep everyone safe and happy continually, and the answer for how to do that is by maintaining peace in the realms. Baijue gives Shanggu a bracelet.

Baijue has another gift for Shanggu: a swing. Shanggu asks Baijue to seal his power for half an hour, imagining getting her revenge by knocking him down, but nothing happens when she attacks him.

Zhiyang and Tianqi praise Baijue when they see an event that happened 8,000 years ago: Shanggu studying. Not trusting Shanggu’s judgment, Zhiyang doesn’t allow her to view reports about the realms. Baijue brings up mistakes Zhiyang made throughout the years. Shanggu complains, frustrated by the books she has to read.

Xuanyi, Overlord of devils, wants to meet Shanggu in the Nether World in three months to negotiate peace. Baijue worries about the barrier of the Nether World weakening, allowing devils to escape into the realms. Zhiyang deems the meeting necessary so they can find out what Xuanyi is planning. Shanggu disagrees. Tianqi sides with Shanggu, so Zhiyang seals Tianqi’s lips.

Packing her things, Shanggu decides to run away. Baijue says devils will find Shanggu wherever she goes, and if she agrees to start training, there is no reason why they have to wait until tomorrow.

Shanggu doesn’t want to stay at Mount Lookout, but she can’t break the barrier. Baijue tells Shanggu not to beg him because he doesn’t pity anyone, not even females.

At night, devils attack Shanggu, leaving when Baijue comes to her rescue. Shanggu says she can’t fight without a weapon. Baijue gives her his weapon, which she can’t lift.

Shanggu refuses to get up in the morning, so Baijue keeps striking a gong to wake her up.

70,000 years ago, Xuanyi rebelled before inheriting the Instruction Feather of the Chief God of Chaos. He combined the Power of Chaos with evil spirits of dead immortals to create devil power. People from the lower realm followed him, and that is how devils came into being. After sealing Xuanyi, Ancestral God created Shanggu with his last breath.

Shanggu can’t control her power after Baijue unblocks her vessels. Baijue covers Shanggu’s eyes and apologizes, having to put his arm around her to help her. Hongri sees them.

Thinking about Ice Cube Baijue, Shanggu can’t sleep and wishes she can talk to Yuemi.

Hongri will teach Shanggu while Baijue is sick. Giving Baijue a taste of his own medicine, Shanggu strikes a gong, yelling at him to stop pretending and wake up. Baijue orders her to get out of his room.

Baijue is sick after unblocking Shanggu’s vessels. Feeling more energized than ever as power courses through her body, Shanggu offers to help Hongri find ingredients to make tea for Baijue.

After brewing tea, Shanggu brings it to Baijue and apologizes for misbehaving. It’s time for Baijue to teach Shanggu swordsmanship.

Growing up with Yuemi, renowned for her skills in swordsmanship, Shanggu has learned the following: drinking, gambling, watching plays and reading romance stories. Baijue stands close to Shanggu and holds her hand to teach her. Hongri knows better than to interrupt them.

Watching Shanggu train diligently, Baijue says he is happy because the tea is good. Hongri tells Baijue that Shanggu spent a lot of effort collecting ingredients for the tea.