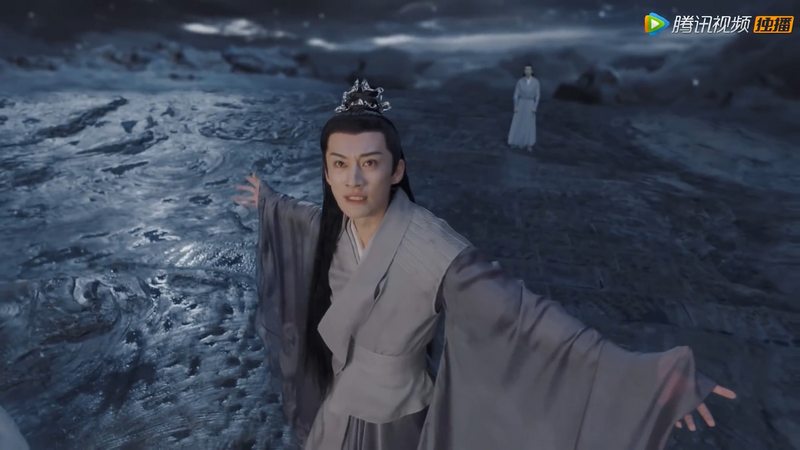 [Flashback: Tianqi decides to save Shanggu.]

Tianqi blames Baijue for pushing Shanggu to her death by pressuring her to become Chief God of Chaos. The Tribulation of Chaos occurs in two days, so Baijue is running out of time to save Shanggu.

The revelation of the Chief God of Chaos’s fate stuns Baijue.

Baijue takes the Instruction Feather away from Shanggu and reminds her to fulfill her promise to spend time with him. At first, Shanggu refuses, but this is the first time Baijue asks for anything in his life.

It’s easy for a veteran of dice like Shanggu to beat Baijue, and for her reward, she wants him to make her laugh three times. Baijue makes fruits appear on pear trees at Mount Lookout, but Shanggu complains, so he turns the fruits into flowers.

At the Heaven and Earth Platform, an inscription regarding the Chief God of Chaos’s fate has appeared, so Zhiyang needs Shanggu to return to the God Realm. Baijue is willing to sacrifice himself, but without the Power of Chaos, his death would only seal the Tribulation of Chaos temporarily.

[Flashback: Shanggu realizes that something isn’t adding up, and she must figure out what the problem is before someone else dies.

At the Heaven and Earth Platform, Shanggu sees the inscription regarding the Chief God of Chaos’s fate.]

Baijue begs Shanggu not to sacrifice herself. Shanggu retrieves the Instruction Feather and makes Baijue fall asleep, breaking her promise to be with him forever.

The Tribulation of Chaos begins to destroy the God Realm. At the Heaven and Earth Platform, Shanggu integrates the Instruction Feather into her cultivation so she can become Chief God of Chaos. Zhiyang orders everyone to help Shanggu.

Thinking of Baijue, Shanggu vows to protect the God Realm.

Baijue keeps trying to break the barrier at Mount Lookout.

Shanggu finishes her cultivation and becomes Chief God of Chaos.

The gods can’t withstand the Tribulation of Chaos, including Shanggu.

Baijue puts his Original Being into the Taicang Spear and uses it to break the barrier.

Shanggu flies upward into the Tribulation of Chaos. Baijue follows Shanggu. Xueying attempts to stop Baijue by using a weapon from the Devil Tribe. Zhiyang realizes that Xueying is a spy for Xuanyi, so he immobilizes her and will punish her later.

Baijue regrets pressuring Shanggu to become Chief God of Chaos, pushing her on a path of no return toward her death. Shanggu sacrifices herself, and as she dies, she wishes she could be with Baijue but not as a god in another life. Shanggu’s bracelet breaks into pieces, falling into Baijue’s hand.