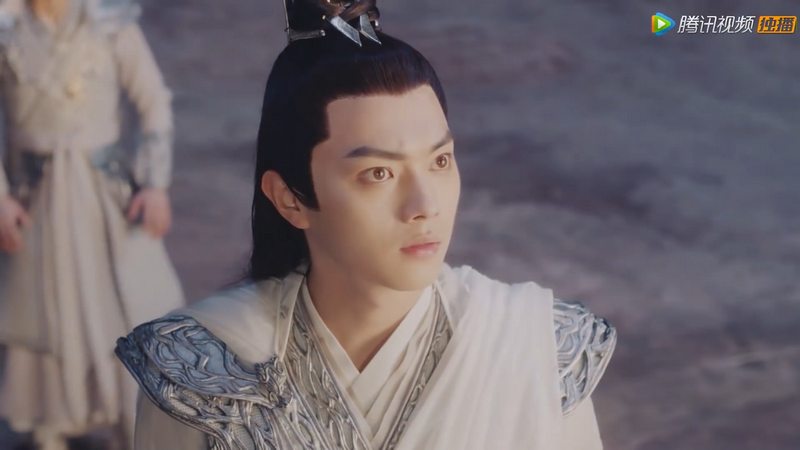 Baijue is shocked when he sees falling stars in the sky.

Shanggu also sees the falling stars and refuses to believe that Yuemi died.

Wuhuan, the sole eyewitness, says Tianqi killed Yuemi. Zihan is certain Tianqi would never do that. Baijue orders Hongri to keep both sides from fighting each other.

It’s time for Baijue to talk to Tianqi.

Baijue gives Tianqi a chance to explain what happened to Yuemi. Tianqi says some things, like the realms, are replaceable while some things are not. Baijue and Tianqi fight.

Muguang disobeys Baijue’s order and attacks Tianqi. With the integration of the Instruction Feather, the Destruction Formation begins to obliterate troops on both sides. Baijue pierces Tianqi’s chest with the Taicang Spear. Tianqi says Baijue will regret this.

Baijue retrieves the Instruction Feather and grieves for Tianqi.

Shocked to see more falling stars, Shanggu leaves Gujun at the South Sea while she rushes to find Baijue.

Hongri says Zihan returned to the Demon Realm. Shanggu sees a statue resembling Yuemi. Baijue doesn’t think Zihan will talk to them, so they won’t know why Tianqi tried to create the Destruction Formation.

Shanggu drinks wine and cries, remembering her times with Tianqi and Yuemi.

Relaying a message left by Yuemi for Shanggu, Muguang says his teacher felt guilty because she helped Baijue and Shanggu to be together for her benefit since she was in love with Tianqi. Shanggu issues a decree, allowing Yuemi to be the owner of the Taoyuan Forest forever and promoting Muguang to be God of Moon and Stars. Baijue asks Shanggu to come with him.

Baijue needs Shanggu’s help to seal the Purple Moon Whip so it can be put away in the Hidden Pavilion. Feeling uneasy, Shanggu accepts the Instruction Feather from Baijue.

[Flashback: The barrier of the Demon Realm is broken, so Tianqi thinks there is a link between the Power of Chaos and the Tribulation of Chaos.]

[Flashback: At the Heaven and Earth Platform, Tianqi finds out the Tribulation of Chaos will destroy the God Realm and all living beings unless the Chief God of Chaos sacrifices herself.]