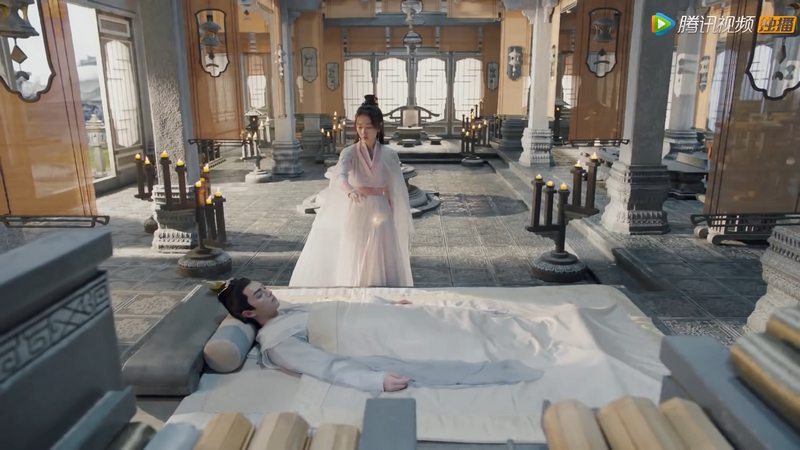 Shanggu saves Baijue, and holding his hand, she promises to be with him forever.

Reviewing what Zihan stole from the Hidden Pavilion, Baijue suspects Tianqi wants to create the Destruction Formation, which destroys the realms and enables the creator to become God of Chaos. Shanggu doesn’t believe that Tianqi is doing this to be Chief God.

Shanggu borrows the Immortal-seeking Bell from Yuemi. Yuemi is in love with Tianqi, so she begs Shanggu to help him.

Baijue searches books for a way to stop the Destruction Formation.

At the Abyssal Ridge Swamp, Shanggu offers to let Tianqi be Chief God, so there is no need for the Destruction Formation. Tianqi refuses to surrender and attacks Shanggu with the Purple Moon Whip.

Wuhuan asks Shanggu about her injury. Shanggu orders Wuhuan not to tell anyone, especially Baijue.

Baijue knows that Shanggu is injured the moment he sees her. Shanggu cries, devastated by Tianqi’s betrayal.

Shanggu says even gods are powerless against destiny. Before Baijue knew Shanggu, he stuck to his principles, but now, he would give her the benefit of the doubt if she did something wrong and is willing to be punished with her.

Shanggu assigns Baijue to lead troops to stop Tianqi. Zhiyang and other gods will guard the Heaven and Earth Platform, the base of the God Realm. Lastly, Shanggu and Gujun will be at the South Sea to protect the lower realm. Yuemi begs Shanggu to let her go with Baijue.

Shanggu tells Yuemi not to be lenient with Tianqi.

Muguang lets Wuhuan come along with the troops, not knowing that she intends to kill Tianqi with a weapon from the Devil Tribe called the Sky Bow. Baijue, flanked by Yuemi and Hongri, leads the troops to the Abyssal Ridge Swamp to stop Tianqi.

Hongri tried, but he couldn’t convince Zihan and the Demon Tribe to surrender. Senjian, Chief of Tiger Demons and made a demigod by Tianqi, arrives to help the Demon Tribe.

Baijue allows Yuemi to talk to Tianqi even though the Destruction Formation is nearing completion.

Full of ambition, Wuhuan hopes to discover evidence of Yuemi colluding with Tianqi and stop the Destruction Formation.

Meanwhile, Shanggu and Gujun must seal the South Sea or it will flood the lower realm.

The power of the Destruction Formation seems to be weakening, but Shanggu and Gujun can’t leave until they finish sealing the South Sea.